two kids, chilling in a hospital, five feet apart so they won’t dieee

Welcome to my itsy bitsy corner of the web! Today I am going to be reviewing this amazing book called Five Feet Apart. 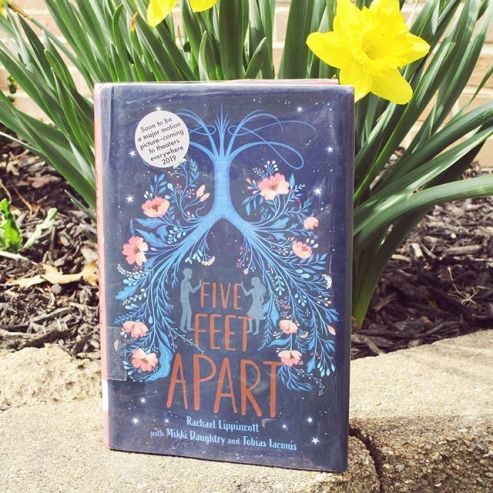 “…Don’t think about what you’ve lost. Think of how much you have to gain. Live, Stella.”

check it out on

This book broke me. It whipped my back in half and shattered my heart. I was expecting a happy ending and I got a sad one. This book made me cry, and not many books do that.

Cystic fibrosis is a progressive, genetic disease that causes persistent lung infections and limits the ability to breathe over time. In people with CF, mutations in the cystic fibrosis transmembrane conductance regulator (CFTR) gene cause the CFTR protein to become dysfunctional.
People with CF have to be at least six feet apart from other CFers or they could catch the bacteria and die. But of course, Stella and Will fall in love, which leads to a lot of distress for the readers.
Since the movie came out I decided to read it! It’s such an amazing book and I really recommend it for anyone who wants a sweet and sad read.

Stella: Stella is a smol and adorable girl who has CF. She is very positive and makes no second thoughts about taking her medicine and doing her treatments. She makes vlogs to help her stay content with her not so exciting life. All that changes when Will comes along.

Will: Will is an edgy risk-taking artsy boyo that might as well wear a trenchcoat. He doesn’t care at all about taking his medicine or doing his treatments. He’d rather just die instead of living in the constant pain of his illness, but when he meets Stella everything changes.

(his hair tho, its beautiful)

Poe: Even though Poe is a background character, he still is a pretty great character. Sadly his story ends near the end of the book (my poor boy.) Poe is one of Stella’s CF friends. He and Stella are like siblings.

“but it’s his smile that catches my eye more than anything else. It’s lopsided and charming, and it has magnetic warmth to it.”

⭐I loved the writing style. It really seemed like it was a real teenager and it didn’t seem forced or stereotypical. I really felt like I could feel all the characters feelings.

⭐I adore the cover! It’s so beautiful the way the flowers form lungs. I JUST LOVE IT!

⭐will and Stella: they were just so adorable. It makes me so sad that they couldn’t be together. :C

⭐ literally almost everything
⭐ will: aka cole sprouse ( in the movie)

⭐ how the authors killed me with their writing

this is an adorable book about two kids chilling in a hospital five feet apart so they won’t die. It’s beautiful and amazing. Even though the ending is sad, it’s still a great book.

I recommend this book to anyone who wants to read a soft and adorable book.

Have you read Five Feet Apart? Have you watched Five feet apart? Would you rather own Cole Sprouse or This book?