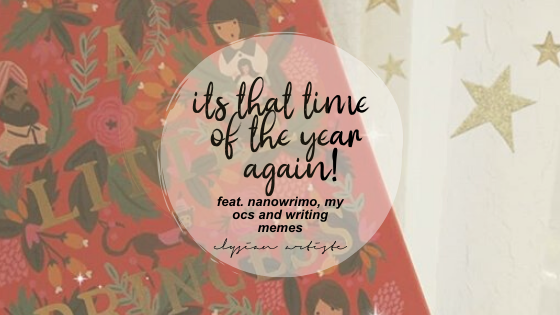 so I looked at my calendar and just realized November 1st is six days away.

Welcome back to my itsy-bitsy corner of the web! So today I have another post about Nanowrimo. (Yes, I am aware that my last post was also about Nano, Sorry I am trying to get back to posting more unique content 🙂 please don’t hate me)

I am really excited for NaNo because I actually came up with a somewhat kind of plot. Usually, I just come up with a title and a book cover and have no idea what the book is going to be about. And then on November 1st I open up a blank Word document and start to panic.

This year I am trying to not only avoid my pAnIc, But I really want to publish a book soon. and I feel like I’m wasting my good characters and somewhat story ideas. So I am trying to take NaNo a little more seriously so I can actually write something I’m proud of, instead of typing a bunch of gibberish just so I can reach my goal.

But, enough of my rambling! Let’s continue the post!

So I guess the big elephant in the room is my nOvEl. What exactly am I writing?

Well, lucky for you I have another rambled sentence that explains my process in coming up with my novel and storyline.

So at first, I was actually going to write a contemporary YA novel about a girl who was homeschooled and some of her ‘struggles’ Because I felt like there were NO YA novels where the main character is just homeschooled. I feel like they are either new to homeschooling or they’re a homeschooler that goes to public school for the first time. And its a bit annoying because sometimes I just want to read a book about a normal homeschooled girl that isn’t a genius and just wants to understand who she is. Because every teenager kind of wants to understand where they belong.

And, I tried to like to come up with a plot but honestly, I wasn’t truly feeling it. If you know what I mean, It’s like something I wanted to write but It wasn’t really something that I loved like. I didn’t feel like I loved the plot or the characters, I just felt as if I was trying to force myself to write something.

But, then one night I had this story idea about a princess and a pirate and a gardener’s son. And I woke up in the middle of the night and I was like YES I AM WRITING THIS FOR NANOWRIMO. I felt really happy, and I developed a bunch of possible storylines and I was just sooooooooo excited.

And, what I have kind of learned these past few years from doing NaNo is that you have to LOVE your story. NaNo is already incredibly challenging so when you write a novel you really don’t like it will be really hard to write that book. And since I’m forcing myself to write a lot of words in 30 days I don’t want to write something I am not truly passionate or interested in.

Swords and Other Secrets

Princess Flora and her brother Fitz have been fascinated by pirates ever since they were young. They spent years, reading books about them and reenacting their battles. But when Fitz disappears, Flora’s world shatters and she is forced to take the place of her brother and become queen on her eighteenth birthday. But, Flora doesn’t want to become Queen, she wants to become a writer. So on the night before her birthday, Flora ventures off on a journey with newfound friends, and some old to find her brother, and to find herself.

I literally just typed that out just now. I’m still working on a synopsis but I’m honestly really excited about my story!

So, unfortunately, I havent made a cover yet because I’ve been having. hard time finding the picture that I want for the cover. But! I made some aesthetics for the main characters! So this is the mood board/ aesthetic that I made for Flora. She’s the main character and the story is mostly about her. She is a princess who dreams to become a pirate and write stories about her adventures. 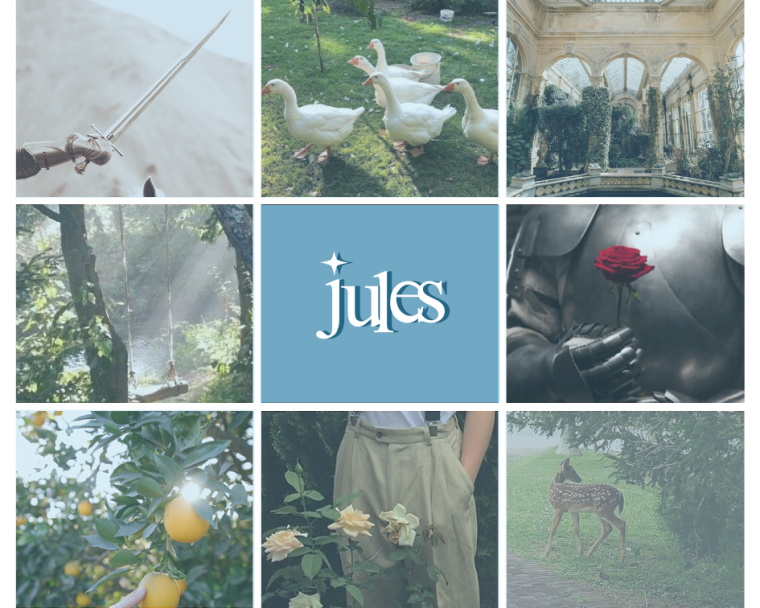 Jules is the royal gardener’s son who is Flora’s childhood friend. Jules dropped his dreams of becoming a botanist, so he could be able to train and become a knight to protect Flora. 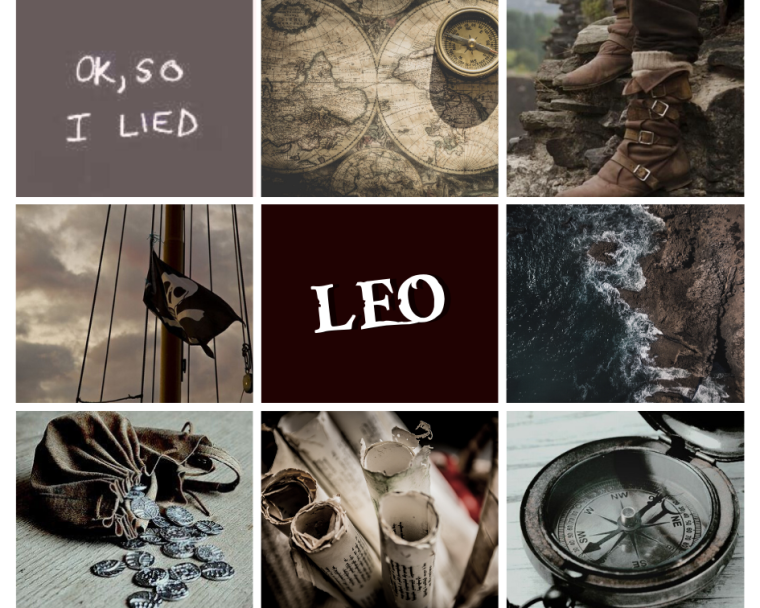 Leo the son of a pirate king, was abandoned and left shipwrecked as a young child. Now, he has fixed his ship and travels to different islands and collects birds and rescues children that were abandoned once like him. Iris is Flora’s pet cat and best friend. Soon Flora discovers that her cat can talk and knows a little more about her kingdom than she ever thought.

so random interruption but I am really excited because Sunday is my birthday so yay this is my last post as a 13-year-old!!!

Also, I’m excited because next Friday I will be posting a Q&A but OC addition!!

So if you are interested in asking any of my main characters of this story a question, comment it down below!! It will be featured, and answered in next Friday’s post!!

The last thing I have for today’s post is writing memes!

I love memes because they are relatable and funny! So I especially love writing memes because writing can often be challenging and hearing jokes about writing takes away the stress. Sooo let’s get started!!

*claps sadly because I relate too much to these memes*

Thanks for taking the time to read this (overly long) post! I am so excited about NaNo and I can’t wait for it to start. (I probably will regret saying that once it starts)

6 thoughts on “its that time of the year again// feat. NaNoWriMo, my OCS and writing memes”