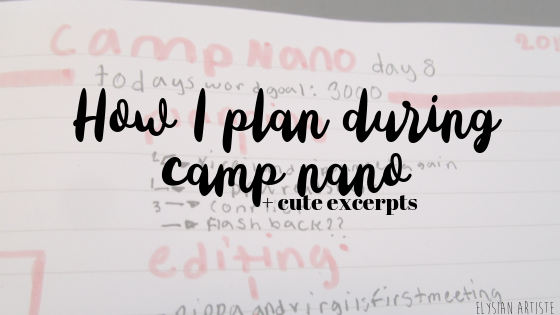 Welcome back to my itsy bitsy corner of the web! Today’s post is going to be another Camp NaNoWriMo themed post! Nanowrimo is short for National Novel Writing Month (which is in November!) Camp Nano is in spring and encourages you to write! It’s really fun because you can have a cabin with your friends and new friends and have fun writing! So in today’s post, I am going to be showing you guys how I prep daily during NaNoWriMo!

So the first thing I do is write the date and my word goal! This way I can look back at my goal later in the day. 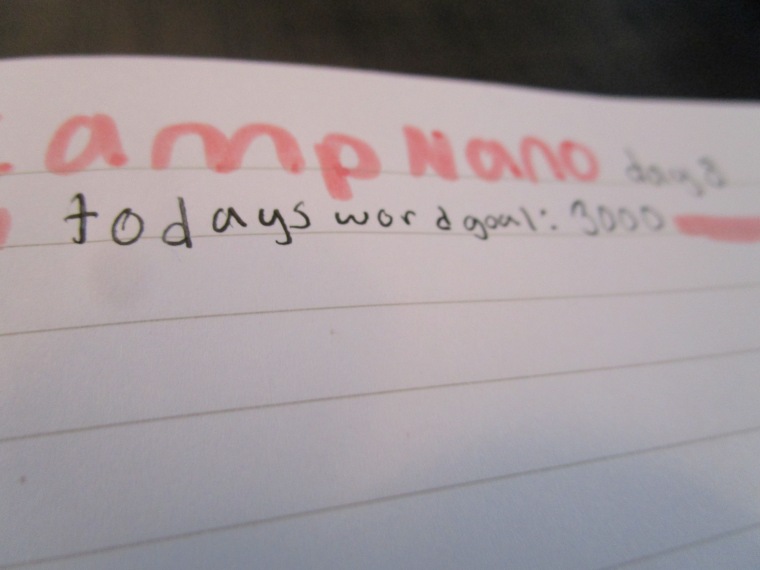 After that, I write down what I need to do. Such as where the plot is going, things I want to add into my story, stuff like that! 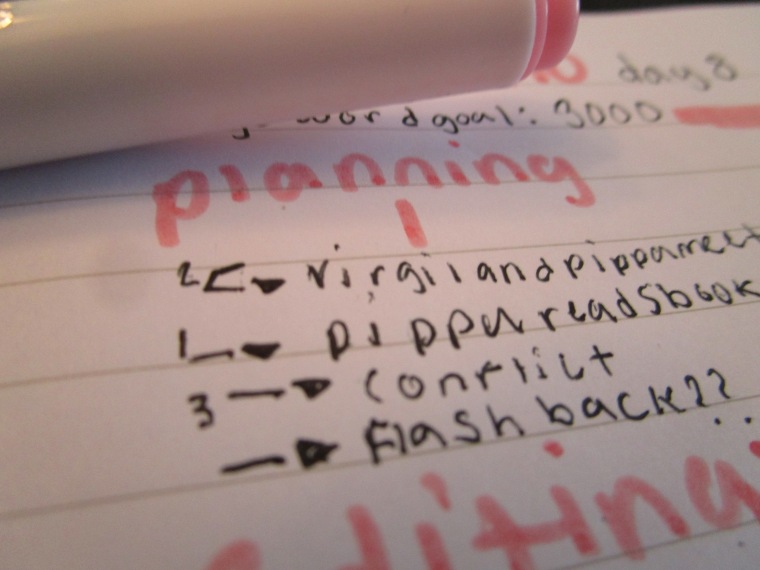 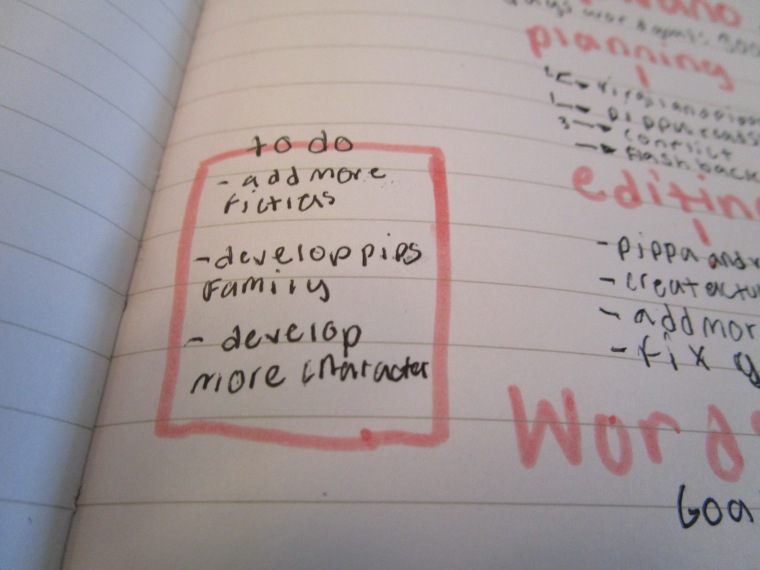 Then I log in my Word Sprints and write down my goals for them!

This is a really great way to keep track of your writing and daily goals.

It really helps me when I set daily goals because I feel like I write more than when I don’t set goals!

Now onto the excerpts!

Now, these are going to be pretty cringey and I probably need to edit more but yeah!

+ Pippa climbed out of bed. Her foot pierced into one of her brother’s Legos. “Ugh,” She grumbled under her breath. “LEO I TOLD YOU TO GET YOUR LEGOS OUT OF MY ROOM!” She screamed, a little louder than she meant too. She was getting a little frustrated. She woke up late, stepped on a dangerous object, she was sure the day would only get worse.

Pippa stumbled down the stairs, she was greeted by her two brothers. Leo and Arthur. They were almost like twins, two months apart and looked exactly the same. Plus they both were awfully mischievous. “What trick do you under your sleeves today?”

“Nothing!” Leo grinned. Leo’s full name was Leonardo and he was named after Leonardo Da Vinci ironically he didn’t have any artistic talent and his inventions never were for the better good, they usually lead to Pippa yelling at them.

Arthur, on the other hand, was obsessed with drawing. It was funny but Art actually kind of looked like Arthur, the cartoon anteater, with his circle glasses and yellow cardigan.

“Sorry guys, I am really moody right now and would love if you guys could move out of the way so I can get something to eat-“

“YOU SHALL NOT PASS. “Arthur mimicked a deep voice.

“Lord of the Rings reference, Nice. But really, can you let me pass so I before I punch you guys.” Pippa smiled a bit.

The boys giggled. Pippa sighed, awaiting a prank or some sort of trick, but surprisingly nothing happened as she walked down into the kitchen.

His trench coat was one of his most prized possessions. Not only was the long black coat comfy, but it was also quite charming and gave him a sophisticated air, which made him feel brilliant. His trench coat was almost like a child’s blankie, a special connection no one really understood. Trenchie (as Virgil liked to call it) was always there for him. There was never a day when Trenchie would let him down. “Come on Trenchie,” Virgil smiled to himself, “Let’s prove those bookkeepers wrong” And with that, Virgil left his humble abode, slamming the door behind him.

+Virgil sat down at his desk trembling. Being a FictFinder was his life and now he was going to lose it just like everything else he loved. His Parents, His brother. He sighed and pulled out his binder. Nothing was even happening so why did the BookKeepers make such a big deal? Virgil was frustrated, angry and confused. Why was this happening to him? Who was doing this? Somedays he thought his life was a book itself and the bad things happened so that the readers wouldn’t be bored. Is it normal for your brother to die by falling into a pot of disappearance? Virgil sighed again. His brother was his best friend, and he always helped him. If Vincent was here right now he could probably get Virgil out of this mess.

Virgil’s phone beeped and he quickly pulled it out. It was a message from one of the BookKeepers. “Great.” He muttered, almost about to set down his phone and get back to doodling all over his case files, but something sparked in his brain. Maybe he should see what it said. Maybe if he paid more attention he would get to keep his job. Virgil picked up the phone and opened up the message.

The boy began to walk off.

The boy turned around, looking straight at her.

“i-I uh have a blog if you want to chat with me there. It’s called Bookish Pippa. Then you could maybe tell you more about yourself.” Pippa stammered. “-Only if you want!”

Virgil smiled softly, “I would love that. Bye Pippa.” He waved and walked down the road.

Pippa watched him slowly fade away into the city. Her heart was beating really fast and she felt as if she was dreaming. “Wow.” She gasped. She mounted back onto her bike. This was the first time anything romantic had ever happened to her. It was like a dream

On the Virge: Thanks. Why are you up so late?

On the Virge: I don’t really sleep.

OnTheVirge: Well it’s kinda an inside joke I made with my brother. I was always just melodramatic and angry as a kid so my brother said on the virge instead of verge

Pippa was smiling very hard and she didn’t know exactly why.

PipReads: So how was the rest of your day?

OnTheVirge: It was actually horrible. I thought it was going to be good because I met you. But life doesn’t like to make me feel happy. SO right after we met, some random wind came and took away my book and I fell and it started to rain and now somehow I am internet famous and known by the world as a total joke and I have no idea how to get back to my world and this random guy let me stay at his house but he might be a killer.

OnTheVirge: Yeah… I mean like my brother got dumped into some weird pot and disappeared, some evil crazy queen is trying to destroy me and I lost my only companion.

Pippa laughed, assuming he was joking. He must have been a huge fan of the BookKeepers. That was basically what happened to the character Virgil.

PipReads: YOu definitely are a BookKeepers fan. You don’t have to hide it I am a huge fan too!

OnTheVirge: What even is that?

PipReads: You gotta be kidding me. Its a book series that you described your life after!

OnTheVirge: I should probably be getting to sleep. I have a long day tomorrow…

Pippa smiled sadly, she didn’t want him to leave.

PipReads: Okay! I will talk to you tomorrow!

Pippas cheeks warmed as she stared at the message. It was so cute!

Pippa smiled and sat her phone back on her nightstand, dozing off to sleep and dreaming of the boy who had stolen her heart.

And those were the excerpts

PLEASE DO NOT STEAL ANY OF THIS.

AGAIN please do not steal any of my work. If you do I will hunt you down and FITE you

I WILL KILL YOU

with kindness, of course 😉

XD I am having a blast with these jokes.

I hope these tips helped you if you are struggling to write your novel! They sure did help me! Thanks so much for reading!

Did these tips help? Did you like my excerpts? Are you doing Camp Nano?

6 thoughts on “How I plan during Camp Nano+cute excerpts!”