Welcome to my itsy-bitsy corner of the web! I am super excited because I am apart of penguin teen’s; When the Sky Fell on Splendor Blog Tour! I cannot wait to share this thrilling and awesome book with you all!

When the Sky Fell on Splendor

Almost everyone in the small town of Splendor, Ohio, was affected when the local steel mill exploded. If you weren’t a casualty of the accident yourself, chances are a loved one was. That’s the case for seventeen-year-old Franny, who, five years after the explosion, still has to stand by and do nothing as her brother lies in a coma.

In the wake of the tragedy, Franny found solace in a group of friends whose experiences mirrored her own. The group calls themselves The Ordinary, and they spend their free time investigating local ghost stories and legends, filming their exploits for their small following of YouTube fans. It’s silly, it’s fun, and it keeps them from dwelling on the sadness that surrounds them.

Until one evening, when the strange and dangerous thing they film isn’t fiction–it’s a bright light, something massive hurdling toward them from the sky. And when it crashes and the teens go to investigate…everything changes.

Emily Henry is the author of the love that split the world. she is a full-time writer, proofreader, and donut connoisseur. she studied creative writing at hope college and the new york center for art & media studies and now spends most of her time in Cincinnati, Ohio, and the part of Kentucky just beneath it.

Before I get started on the review I just want to thank @penguinteen for letting me be a part of this blog tour! It has been an amazing experience and I hope to do this again 😀

disclaimer: I received a physical copy from the publishers for free. This has in no way influenced my review. Everything that I am stating is my honest opinion.

First of all CAN, WE TALK ABOUT THE COVER? It is so gorgeous! I love how the alien space ship is coming down and there are all the stars on it. spoiler alert; there are no alien spaceships that actually come down. But it is still a really pretty cover.

I really liked this book! The quirky characters, the retro feel, and ALL THOSE BIKES. I thought it was so cute the way all the characters are like one big family.

Before we get further into the review I probably should introduce you to the amazingly weird and unique characters that make up the ordinary.

The ordinary is the characters kinda of this club where they make fake and not so good quality youtube videos about their adventures. It distracts them from there everyday struggles and the depressing thoughts of their past.

Franny: Franny is our young, narrator and kiddo of the group. She is 17 but I feel like she could be 13. I personally didn’t find her as interesting as the other characters and she seemed to have a little less depth than some of the other characters.

Arthur. Arthur is Franny’s older brother. I really loved Arthurs dreamy personality and I could really relate to the way he bounced back and forth with current obsessions because I kind of do that too.

Levi: Levi is the camera guy that films all the videos. He’s rich and cool and an okay character I guess.

Sofia: She’s like the mom of the group. Very sensible and rational. I love how she is super smart and sporty at the same time.

Remy: Remy is a smol boy with stress issues and worries about Franny because he loves her. He has constant nightmares (poor boy) and His dad is also a sheriff and doesn’t always listen or pay attention to him.

Nick: Nick Has a small (okay BIG) Lying issue and sometimes steals things. (what a bad boy XD) He also has to work full time to support his mentally ill mother.

What I loved the most about these friends is that they probably never would have ever thought of becoming friends, but grief brought them together.

They were the Ordinaries, kids who were alone in their sorrow after a Mill accident that killed someone close to them. But, then they all met and somehow became this quirky little family. I just thought that was really sweet.

my not so favorite things

Even though I really enjoyed this book there were a few things I personally didn’t like about it.

There were too many characters.

When I first started reading this it was a little confusing remembering who was who. I personally think six characters is a little too many main characters. I think the book might’ve been a better read for me if there were only four characters. (Franny, Remy, Sofia, and Arthur) After getting used to the characters I could understand it more, but It was a little hard to keep track of.

Some parts were very confusing.

At some parts of the book, I didn’t really know what was going on and felt very confused. It took me a while to understand most of what was happening and even now there are still a few things I didn’t understand.

The ending was kind of confusing for me and I didn’t really know what was going on and what happened. Even after rereading the end, I still was slightly confused.

Even though the number of characters was slightly overwhelming, I really liked how different there personalities were, and how they all had this sort of depth to them. I also love how they became friends while struggling through grief and how they all supported each other in their own different ways.

This book feels like it was set in the 90s and the characters are just kiddos riding bikes, using walkie talkies and finding suspicious things and I think that is just really adorable.

I recently haven’t seen a lot of YA Sci-Fi books published in a while and I think this is a really great one.

the cover is really pretty and I love it so much! Even though it is slightly misleading because no alien spaceship falls down it is really great.

This was an amazing and unique book and I am so happy that I got a chance to read it!

I along with the review I made some mood boards! I really love how they turned out. 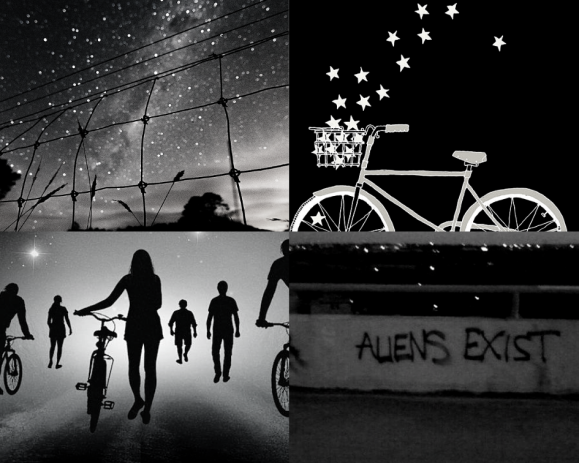 I really recommend this book to anyone who likes science fiction, adventure, strong friendships, or anyone who is looking for a new favorite book!

Also, make sure you check out the other blogger’s posts too! They are really cool!

7 thoughts on “When the Sky Fell on Splendor Blog Tour feat. mood boards and squad goals”